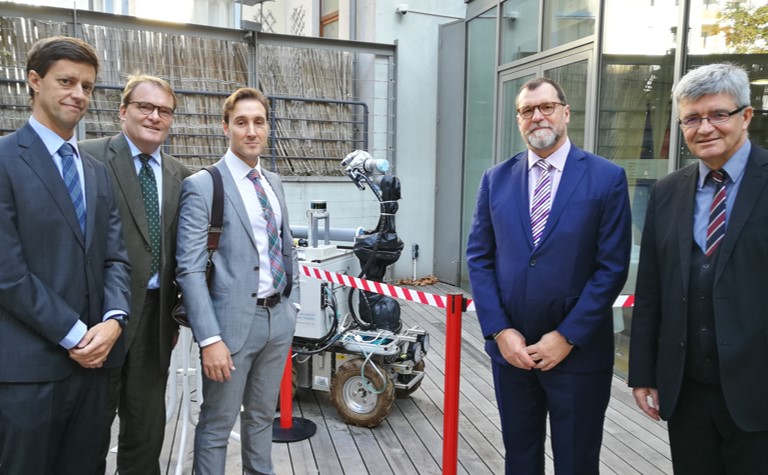 Under this topic the Saxon Liaison Office in Brussels, represented by Director Christian Avenarius, welcomed about 60 representatives from mainly Brussels based institutions to the side event From Saxony for Europe - Skills and Research for the Mining of the Future at the European Week of Regions and Cities. The focal point  of the event was the Freiberg based research mine, which is a fully operational active mine and in-situ lab for underground research. The Rector of the TU Bergakademie Freiberg, Professor Barbknecht, opened this half-day event which was aiming at a critical review of EU mining and the need for large scale research infrastructure.

As this topic is one of the building stones of the work on networking mining regions, the MIREU project participated with Dr Wolfgang Reimer from GKZ Freiberg and Professor Michael Hitch from Tallinn University. Both speakers explained how MIREU can contribute to valorising regional large scale research infrastructure, and how Social License to Operate (SLO) determines the process of mining acceptance as a major precondition for an enlargement of mining research across Europe. Richard Tuffs from ERRIN moderated the session, bringing an interested, but in the mining topic rather inexperienced, audience together with the speakers and panellists.

Rodrigo Chanes Vicente from DG GROW gave an introduction to the EU mining sector, which with its 320,000 jobs is an important contributor to the industrial wealth in the EU. However, despite the estimated duplication of supply demand of metallic minerals by 2050, European mining faces a decline as the EU's part amounts to only 3.2% of world-wide exploration expenses.

The still unpublished RM scoreboard 2018 shows that even recycling faces limits, which was given by the global material flow across the value chain for aluminium.

Gauthier Grousset from DG EAC informed about EIT Raw Materials and other existing cross-European research networks to foster industrial research in the EU, in order to lower the supply risk by new technologies. Philippe Froissard from DG RTD discussed the necessity of large scale infrastructure and supported the approach presented by Professor Helmut Mischo, Director of the TU Bergakademie Freiberg research mine. Mischo attracted the audience's attention with a journey into digital mining and displayed a number of opportunities an in-situ underground research lab can and will offer. As part of the show, the lunch break was the hour of “Julius”, which is the latest mining robot produced in Saxony and which already “worked” underground. There is no doubt that the increasing depth, decreasing ore grades, complex mineralisation, restrictions due to environmental and social footprints, and the limitations due to available technology force researchers to provide mining the latest technologies.

Wolfgang Reimer reminded the audience about the paradigm change of EC policies in terms of defining raw materials as a societal challenge along with agriculture, climate, and energy, and the focus on industrial policies at regional level. In this regard, it is good news that mining and metallurgy also are attributed a source of smart specialisation in the regions, which gives way for new EU incentives. In this regard large scale infrastructures, such as the Freiberg based research mine, are of significant importance in fostering European self-supply and export. There is no doubt that in the future complex challenges in raw materials supply and consequently also in industrial and academic research require a consorted action. MIREU aims at networking mining regions by analysing background conditions (policy-making, finance, R&D infrastructure, smart specialisation), including a SWOT analysis, and Reimer sees substantial potential in many MIREU regions which are now under investigation.

He also pointed out that - despite all the bad news - Europe is a leader in many mining related businesses, such as mining equipment and supplier market. Nevertheless, setting up world class research infrastructures in distinct regions is one important step forward to claim more market share and vice versa to pave the way for more and also greater domestic mining entrepreneurship in Europe.

MIREU can assist this process, such as with the 2018 planned MIREU SWOT workshop on the mining regions R&D capacities as an integral part of the networking. Of course, this workshop will take place in Freiberg, Saxony!