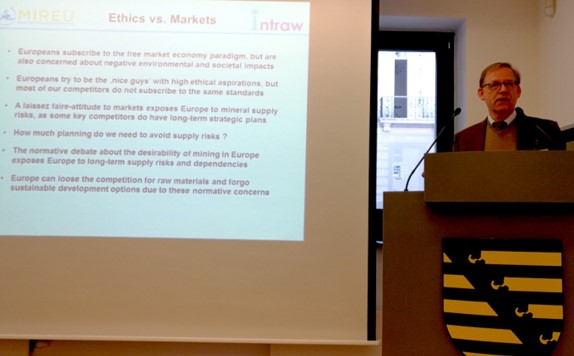 Under the title "Ensuring SLO is adaptive and resilient", GKZ and the University of Lapland organised the third (and final) SLO stakeholder workshop of the project MIREU - Network of Mining and Metallurgy Regions in EU - in Brussels. The host was the Saxon Liaison Office, which is increasingly dedicated to mining issues and has become an important port of call in the heart of Europe in this regard. As the leader of the SLO work package in the MIREU project, the University of Lapland team would like to thank GKZ and all the partners who helped design and run the workshop as well as a big thanks to all of the participants.

The workshop was split between the main event and an optional session with KU Leuven. The topics for discussion in the main event included (1) the different view of stakeholders and applicability of SLO at the regional level; (2) understanding how continuing to empower communities could affect the administrative, legislative and political decision-making processes; (3) the general negative perception of mining across Europe and whether the industry can borrow experiences from other industries, for instance, forestry; (4) examples from different European regions that encourage SLO via a non-binding approach; (5) how SLO is seen outside of Europe and what it means for a European mining industry that is operated by global industrial players; and (6) what should be taken into consideration when developing an SLO guiding framework tailored for Europe.

The two-day workshop showed that the understanding of SLO varies across Europe and, more often than not, SLO is not the term used when addressing acceptance issues at the regional level in Europe. Also of note was the debate around the general trend toward citizen empowerment. For example, the climate change movement Friday-for-Future, and the concerns some in the mining industry have as to how far that empowerment could go, and therefore the potential for SLO to be used as a veto to stop any development. Two important questions arose “does civil society need to be accountable to anyone?” and how do we reconcile SLO, which is defined as voluntary measures, with current legislation that already gives substantial participation to the public? MIREU partners and stakeholders from both Europe and overseas determined the core drivers of and barriers to SLO fitted in the European context in order to improve SLO’s resilience and adaptiveness.

The SLO measures introduced by different partners and presenters ranged from strategies to raise raw material awareness, to improvements in the educational system, to government changing stakeholders’ perceptions by directly involving stakeholders in (technical) evaluation processes, to companies adopting voluntary-based standards schemas created by governments and/or mining associations, to creating a neutral space for stakeholder communication - the list goes on.